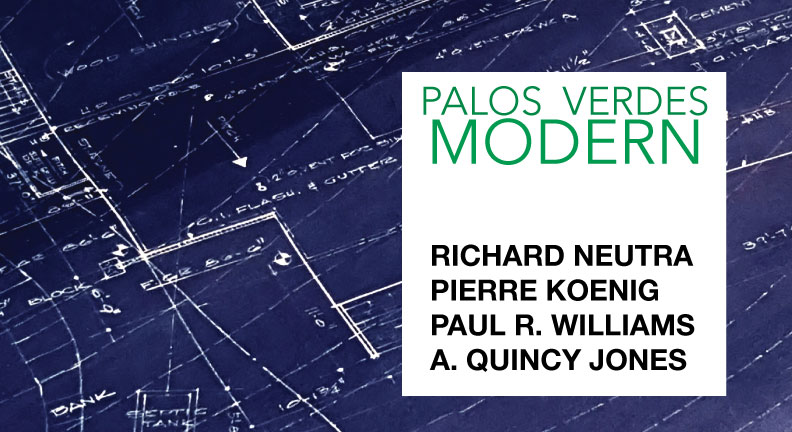 The story of the development of the Palos Verdes Peninsula in the mid-20th century mirrors that of many post-war communities in America. A rising middle class sought suburban refuge and a leisure lifestyle. The growth of the aerospace industry brought an influx of workers to the South Bay. Attracted by the scenic landscape, clean air, ocean views, and proximity to Hughes Aircraft Company and Northrop Corporation, the Palos Verdes Peninsula became a desirable destination. Between 1950 and 1970, the population of Palos Verdes Estates grew from 2,000 to 13,300. Along with the demand for affordable housing came the need for amenities such as shopping centers, schools, libraries, and cultural centers. The resulting building boom was fertile ground for the architecture superstars of the era: Pierre Koenig, Richard Neutra, A. Quincy Jones and Paul Revere Williams.

Best known for his Case Study Houses #21 (the Bailey House) and #22 (the Stahl House), architect Pierre Koenig completed the Henbest House in Rancho Palos Verdes in 1966. Like its iconic predecessors, this property is distinguished by its open-plan, spectacular views, and blurring of indoor/outdoor spaces. Another Case Study architect, Austrian-born Richard Neutra, came to Los Angeles seeking freedom, innovation and “an idyllic tropical island where one does not have to fear the winter.” Of his ten residential designs on the Palos Verdes Peninsula, the earliest are the 1940 Beckstrand House and the 1950 Coe House; both relatively modest in scale, but exquisitely detailed and site responsive. His largest area commission was the sprawling Palos Verdes High School campus situated on 37 acres, designed with Robert Evans Alexander in 1961.

Following his success with the master plan of California State University, Dominguez Hills and the University of California, Riverside, A. Quincy Jones was chosen to design the Peninsula Center Library with partner Frederick E. Emmons in 1967. A pioneer of “green” design, the architect included vertical wood louvers to control sunlight in the courtyard reading room. Jones had previously worked for the renowned architect Paul Revere Williams who was responsible for the distinctive midcentury modern project, SeaView Palos Verdes. The developers of SeaView capitalized on Williams’ winning reputation as architect to the Hollywood elite of the period. The 190-unit tract offered eight different models and was marketed in 1960 to veterans on the G.I.Bill seeking luxury living at affordable prices.